When it comes to responding to the climate crisis, Bonnie Blodgett doesn’t believe in incremental change. Within the last several years, she has purchased two parcels of land – a serendipitous deal to preserve an organic farm in western New York and a defensive move to slow the expansion of factory farming in western Wisconsin – and turned management of the land over to local farmers on paths to owning the land through contracts for deed. Bonnie is a longtime journalist, writer and prolific gardener, and she operates with a tremendous amount of knowledge about the causes, impacts and inequities of climate change. When we asked Bonnie whether she’d surprised herself in either of these unplanned land purchases, how she thought about them and why she was positioned to act, she responded, “I don’t think, I act.” 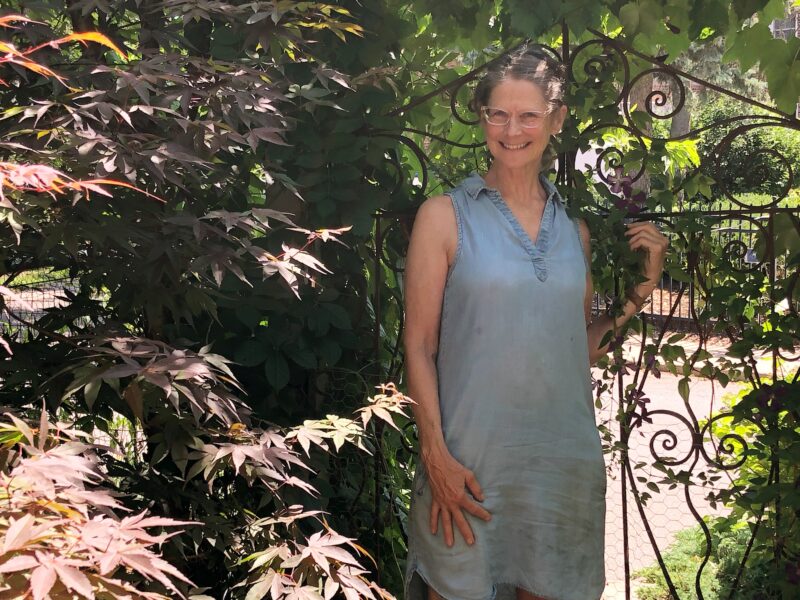 Bonnie in her St. Paul garden

Here are the stories of these two land purchases, in Bonnie’s words.

“I’m always doing these crazy ass, hopeful things. I am very, very open to someone saying, ‘Would you help us with this?’

The first farm I bought is in upstate New York – a 300-acre farm that was certified organic went on the market. I was looking at my emails, and up popped this beautiful picture from a national clearinghouse for land. They found me – I was not looking to buy. I called them up, and the realtor who answered the phone told me that ‘a couple of kids’ were trying to buy the land. I said, ‘I’m coming out, I’m going to buy it for them,’ and I got in my Fiat and drove to western NY.

It was total serendipity. I was immediately impressed by the young farmers’ enthusiasm and skills. They had made an offer but couldn’t pull together the financing, so that’s when I stepped in. I bought the farm on a contract for deed with a lot of flexibility. They’re paying me off for the lower half that is the actual farm (barn, house, etc.), which had been run quite profitably by the previous owner, an Amish farmer – which is why it was certified organic and also why the kids had to rewire the house and barn and build a modern bathroom and figure out how to get heat and … a few other things. Many of the farm’s neighbors supported Trump. These neighbors have shown great generosity, offering skills and resources – they’ll drop anything to help the kids tile a bathroom or fix a tractor.

I stay in close touch with the lead farmer, who sends detailed updates and photos. They’re in their first year of operating the diversified vegetable farm and have chickens, with a long-term plan to add hogs and cattle. There’s an upper parcel that I own that they can use for pasture. I’m letting them manage and use it, though I thought it was too much for them to have to buy it back from me now. We’re playing it by ear. My goal is not to put them under any more financial pressure than they already are! This is not about money for me.

I bought the 68-acre parcel in western Wisconsin after an activist friend in Iowa alerted me to the CAFO (Concentrated Animal Feeding Operation) fight there. I called the leader of the fight, Mike Miles of Anathoth Community Farm in Luck, and offered to buy the land out from under the proposed CAFO. He said that wouldn’t be possible, but I could buy a parcel adjacent to his farm that would be perfect for one of the feeder piglet operations Smithfield plans to build once they get the CAFO (26,000 hogs) up and running.

Smithfield was sold not too long ago to a Chinese conglomerate that is keeping its U.S. name as part of its scheme to grow in the U.S. This part of WI, like western NY, is Trump territory, meaning it’s populated by poor white people who’ve lost everything thanks to neoliberal globalization and are being portrayed in the media as bigots and racists so as to suppress the truth about what happened to these once thriving communities.

I bought the land near Luck outright and will arrange to sell it on a contract for deed to a young man who wants to run it and raise his kids there. Until they are able to move, Mike is managing the land. Mike and his wife, Barb Cass, and I just hit it off immediately, and they’ve become close friends. Their farm is a Catholic Worker farm based on the study and practice of nonviolence, community and sustainable living. Mike makes his meager living raising grass-fed cattle. They also raise chickens and pigs and do a bit with veggies, but mostly use their land for pasture and move the ruminants from place to place to keep the manure feeding and improving the soil.

Mike is also a scientist with advanced degrees in soil science and zoology. And he is a lifelong radical who, through the Catholic Workers movement, has gone to jail numerous times and delivered humanitarian aid to war-torn countries including Iraq. Mike walks the talk and so does Barb. They are amazing people. I am so lucky to have met them.

I’m not rich. I cash-flow my land grabs by running three Airbnbs in my big old Victorian home. I raise chickens and offer free eggs. Not sure if this is the appeal (the chicken or the egg or both), but I’m pretty much always booked.”

As we were publishing this blog, Bonnie wrote with an update on the Wisconsin CAFO fight: “I did hear from a Smithfield surrogate with an offer to buy the 28-acre pasture section of the WI farm, obviously to build one of those satellite CAFOs for raising piglets that Mike mentioned. The mother ship CAFO will be in Trade Lake, but that’s just the beginning.”

Climate Land Leaders is grateful to Bonnie for sharing these stories that encourage expansive thinking about resource-sharing and ensuring land access and stewardship. Bonnie writes a regular column for the Pioneer Press. You can check it out here.