Climate Land Leader Paula Westmoreland talks about her history with Iowa farmland and her plans to devote the proceeds of that land’s sale to regeneration and equity.

I grew up on a farm in the prairie pothole region of northwestern Iowa near Storm Lake. Dad bought 240 acres in 1955 and by the time I left for college, he had close to 600 acres. The farm had heavier clay soils, two creeks and a railroad tracks running through it. When I was little, we had beef cattle, a dairy cow, pigs and chickens. The farm had pastures, alfalfa which we baled for hay, corn, soybeans and small grains. 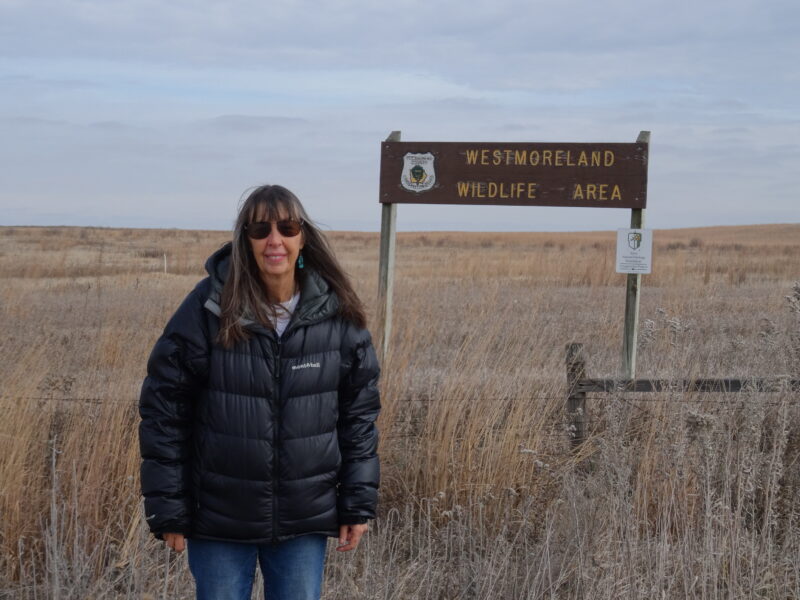 My parents were inspirations in my life. They gave me a deep love of the land and a strong sense of social justice. I left the farm in 1971 to explore the world and never lived at the farm again. A farmer all of his life, Dad passed in 2008. My mom, a junior high school teacher, died in 2011, and at that point I and my two sisters inherited 240 acres.

In June 2021, my sisters approached me about wanting to sell the land. They were interested in proceeds from the land sale for their retirement.

I had a month to decide. The land was in a farm corporation and we could have divided it up, had it surveyed and each of us would have 80 acres. But the financial transactions would have been complicated.

I wasn’t planning to move back to the community and the farm was located where it would be difficult for a regenerative farmer to get established.  So I decided it would be better for me to sell the land.  Part of my decision was based on maintaining family harmony and I didn’t want to create an issue with my sisters.

I had some requirements though. There are a lot of CAFOs [Confined Animal Feeding Operations] in the area and I wanted to make sure the land didn’t end up in animal confinement. We had a six-acre parcel with a well that would be easy to turn into an animal confinement facility, so we donated that parcel to the Iowa Natural Heritage Foundation. My dad had donated 80 acres to INHF back in the ‘90s which is now the Westmoreland Wildlife Area, so we already had some connection with the organization. With that agreement between the three of us, I was comfortable moving ahead with the sale.

Selling the land was an emotional experience for me. Before the auction, I traveled to the farm and did a land blessing at each of the fields. The blessing was a prayer and a thanksgiving, a way to show gratitude to the land for being productive, for all of the gifts it gave to our lives. I acknowledged the indigenous people whose land was taken and that my family were stewards for just a short time.

I also wrote a land legacy letter, which was a summary of my memories of the farm, what I knew of the history of the land, and my hopes and wishes for the future of the land. I wrote about playing hide and seek in the pasture and about walking the bean fields pulling weeds. We got a penny a row, and some of the rows were super long and others were shorter, so my brother, now deceased, and I would fight over who got the shorter rows. I wrote about taking care of the animals and bailing hay on hot days. And the huge meals Mom and I would make to feed the crew.

In my letter, I also wrote that I wanted the land to become healthier again, with no chemicals used, buffers kept intact along the waterways, and that there be good stewards of the land in the future.

I buried the letter down near the creek.

The land blessing and land legacy letter helped bring some closure for me, an important step in letting go.

And now, I’m on a journey of deciding the best way to move forward with the proceeds from the 80 acres. The Minnesota Agrarian Commons is getting established, and one option is to purchase land in Minnesota that can go into the Commons with a long-term lease for a beginning BIPOC [Black Indigenous People of Color] farmer. Another option is to provide a monetary donation to the Dakota people, who were in Minnesota when colonization happened. A third option is to buy land near Amery, Wisconsin, where we’re living now that could transition to a regenerative farmer.

In the meantime, the money is parked. Over the next year I will explore these options. I plan to save some of the proceeds for the future, but want as much of my inheritance as possible to go back into land. Land is precious and the next generation needs access to it.