Good afternoon! I am very happy to be here today. What a beautiful day it is for a field day!

My name is Wendy Johnson, a farmer and Climate Land Leader who stewards land on former hunting and foraging land of the Ioway, the Wahpeton and Oceti Sakowin Sioux, Sauk, Meskwaki, and Winnebago peoples. The area is now called Floyd County, Iowa, almost 2 hours directly south of here. I grew up on the land I now steward, left it to attend college and a career in the fashion and marketing industry, but it pulled me back from California where I met my now husband and we have been learning farm stewards since 2010.

My parents, my husband and daughter and I farm together on the family farm, which is around 1,000 acres of conventional corn, soybeans, small grains and hay. This farm is called Center View Farms and is the livelihood for all of us, driven by profit to support our family and keep us in the business of farming. My husband and daughter and I started Jóia Food Farm in 2015 as an incubator for practices that we can try on a smaller scale to see what works and what doesn’t, and to one day expand some of these practices into a larger scale.

Our farm is certified organic with a long rotation including pasture, small grains, corn and soybeans. We also raise sheep and lamb, pigs, poultry and some cattle for direct-to-consumer and wholesale markets. We grow trees and shrubs with edible nuts and fruits, restore sensitive areas such as riparian areas, establish pollinator and prairie habitats, establish silvopasture, graze perennials and believe that healthy animals, healthy plants, and healthy soil are all necessary for healthy food and water. 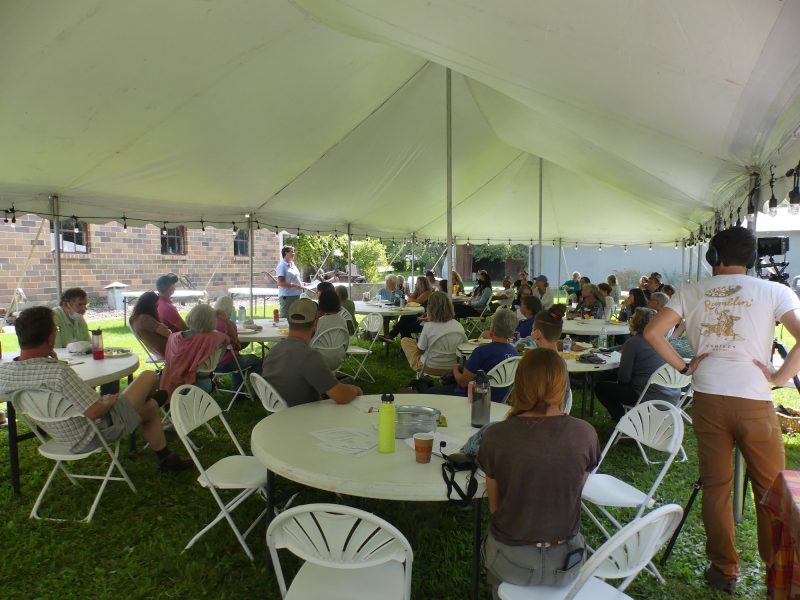 50 gathered at the Sharing Our Roots Farm in September 2021 to explore climate and agriculture.

Because we are farmer land stewards, we are in the elements every day. Weather affects our daily life, it determines what we prioritize for the workday, it affects our herd health, it affects what we grow…it is the one major uncontrollable variable that makes farming such a financially high-risk occupation. Add in the effects of climate change due to the overuse of fossil fuels and emissions in the earth’s atmosphere, it has caused weather variability to increase 10-fold and each year it is moving in the wrong direction.

Since we moved to Iowa, in 2012, we have had a major drought. In 2016 and 2018 we had major flooding, creating massive erosion in areas that never were. In 2020 and this year, we have been in severe drought mixed with torrential and erratic downpours. This year alone, our annual crops suffered from an unusual late frost near Memorial Day, three tornados, severe drought (not a drop in the entire month of June) and an increase in insect populations most likely caused by drought. My father is 80 years old, and almost each year in the past five years he has said, “I’ve never seen this in my entire farming career.” He’s been farming in Iowa for over 50 years.

Welcome to the world of climate change that is firmly and unequivocally here. The U.N report on Climate Change, released in August this year, was sobering: We are locked into 30 years of worsening climate impacts no matter what the world does. This means some of the noticeable effects the world is now seeing, such as extreme droughts, severe heat waves, catastrophic downpours, flooding and storm systems creating derechos and tornados, will continue to worsen.

We cannot live in fear but need to be working aggressively toward resiliency. This means diverse cropping rotations, massive increases in perennial systems, local and regional food economies, growing community and not division, increasing use of renewable energy, and getting more people and farmers on land to grow food.

Now, we are no saints. Agriculture accounts for about a quarter of our greenhouse gas emissions, and farms like our family farm and even Jóia are part of the problem – but also the solution.

Center View Farms, our annual cropping systems farm, is energy-dependent. We use fossil fuels in almost everything to grow corn and soybeans, from the diesel in the tractor engines to the manufactured chemicals and fertilizers used to ensure a 220-bushel corn crop to the natural gas to dry the corn in the bin. I am ashamed of this system, and I feel stuck in it. But if we want to remain in the business of farming today, we need to grow corn.

It doesn’t matter if it is organic or GMO or non-GMO, farm businesses in Iowa and around the Midwest rely on the income from corn and soybeans. It is what carries the farms. Small grains like oats, rye, barley and wheat are a drop in a bucket compared to corn. Ask any farmer, if you switch to another grain or turn your high CSR [Corn Suitability Rating] crop ground to pasture for grazing — anything other than corn or soybeans — you have to enter in the opportunity cost of corn, and hands down, you won’t make much money if anything at all. Especially with today’s current high prices of commodity crops. I have neighbors that only grow corn year after year after year, and their farms are growing and growing, buying out all the land that is up for sale.

America needs to divorce itself from its addiction to corn sugar. It is in everything, and it is in everything because we grow an overabundance of it and thus it’s cheap. We also need to reduce meat consumption from CAFOs [Confined Animal Feeding Operations]. Corn and soybean meal make up the entire feed rations for these animals and birds for their entire lives. The indigenous people here grew maize and beans, but never at the levels we see today. The “feed the world mentality” is a savior complex using food as a weapon. Food and clean water should never be a weapon.

The Midwest has some of the richest soils in the world, and we can grow so much food. But we are wasting our precious soils on crops that are simultaneously making us sick. Regionalizing and localizing food economies are very important to help make us more resilient, AND they strengthen our communities. It also would make farming an equitable, accessible and inviting occupation for people to consider and in general, use less fossil fuels.

To me, the solutions are clear: Perennialize agriculture, which would result in a huge reduction in fossil fuels use because there are fewer passes across fields and no need for artificial chemicals or fertilizers. Perennial agriculture holds the soil, increases water-holding capacity, and — with proper animal integration — can actually build soil! Agroforestry practices such as riparian restoration, orcharding nut and fruit crops, silvopasture and managed rotational grazing are all ways to perennialize agriculture. These all require people on the land and don’t require huge machinery. Perennial grain crops are being developed such as Kernza, that are hopeful replacements for annual wheat.

But swimming upstream is hard. Making enough to build and grow a perennial farm is hard. There are times I’ve considered, should I just give up? Should I just get a job off farm, rent all of it out to the highest bidder and turn a blind eye? It would be so much less stressful! But I can’t. I want to be part of the change I want to see in the world and what better way to be an agent to change than moving back to ground zero – Iowa — one of the most altered places in the world.